Great news in the looming fight to legalize casinos in New York: Assembly Speaker Sheldon Silver said he is opposed to placing a casino in Manhattan or any of the surrounding boroughs, according to the New York Daily News.

That’s a good first step but Silver’s logic is flawed. If casinos are a bad bet for Manhattan (and they are), how are they OK for the Catskills or Saratoga Springs? The same problems that would come from a casino in Manhattan would follow a casino anywhere in the state.

Silver correctly understands the negative impact of casinos in New York City. His opposition is good, considering Gov. Andrew Cuomo recently floated the idea of legalizing casinos in the state. Silver will wield considerable power and influence over any effort to legalize casinos.

Of course, elected officials are prone to saying no to legislation as part of a broader negotiating tool. Just take a look at this recent post to see how the powerful House Speaker in Massachusetts changed his position on gambling.

END_OF_DOCUMENT_TOKEN_TO_BE_REPLACED

The hundreds of millions of dollars sloshing around state lotteries creates ample opportunities for political shenanigans like the awarding of sweetheart contracts to the well connected to cushy jobs for cronies.

This story in The Washington Times raises questions about the awarding of a contract by the D.C. lottery. Despite some red flags there does not appear to be any effort to get to the bottom of what if anything happened. It’s a cautionary tale for other states where rivers of money run through the lottery system, especially states like Ohio that are looking to privatize the lucrative lottery operations.

END_OF_DOCUMENT_TOKEN_TO_BE_REPLACED

Massachusetts’ House Speaker Robert A. DeLeo’s decision to drop his bid to add slot machines at racetracks apparently sealed the deal to add three commercial casinos around the state, The Boston Globe reports.

Negotiations broke down last year because DeLeo wanted slots at race tracks. At the time, his tough stand was supposedly to protect blue collar workers at the track, where his father once worked. But a year later he threw them under the bus to get a casino deal done with Gov. Deval Patrick. Now he is trying to spin his backing down as a positive.

Memo to DeLeo: more legalized gambling is not a lifeline for working-class residents, it is more like cement shoes. Sure the casinos create some temporary construction jobs and permanant gambling-related positions. But the addition of a casino sucks more money out of the pokcets of hard-working people than it puts in. Remember this is an industry model built on taking money from people. It produces mainly losers. More specifically, it leaves many customers deeper in debt and leads to an increase in crime, bankruptcy and divorce.

END_OF_DOCUMENT_TOKEN_TO_BE_REPLACED 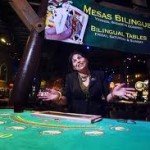 Casinos have long targeted Asian gamblers and other niche demographics like country music fans. But now a casino in western Nevada is catering to Latino gamblers in Southern California, The New York Times reports today.

The story makes clear what the goal is: teach Spanish-speaking gamblers who enjoy penny slots how to “put down at least $5 a hand at a card table.” It retail parlance this is called up-selling. To better help separate Latino gamblers from their pesos, cocktail waitresses roam the casino floor offering shots of top-shelf tequila.

As more casinos open and competition heats up, operators are going after target markets. The extra effort will help create new customers who never gambled before, which, in turn, will result in more problem gamblers. That will lead to more crime, divorce and bankruptcy in the Latino community where many are already struggling to make ends meet. Some business model.

END_OF_DOCUMENT_TOKEN_TO_BE_REPLACED

As New York Gov. Andrew Cuomo floats the idea of legalizing commercial casinos, this story in The New York Times offers a look at the type of clientele attracted to the former Off-Track Betting parlors.

It makes no sense to offer new gambling outlets now that the scuzzy OTBs closed after going bankrupt. Here’s how a Dyker Heights bakery owner described the scene at the OTB near her shop: “The language. The fights. The filth.”

The manager of restaurant near the former OTB on W. 72nd Street said gamblers littered on the sidewalk, called out rudely to women, and sometimes solicited money from his customers. “The bottom line is we’re glad they left,” he said.

Mayor Michael Bloomberg hinted at another danger of having the state in the gambling business. “Only in government can you run a bookie operation and actually lose money every year,” he said. Cuomo should be glad the gambling halls are gone rather than exploring ways to bring them back.

END_OF_DOCUMENT_TOKEN_TO_BE_REPLACED

An Indian casino in Mississippi that from the outside looks like a Target store has run into a series of problems that raise questions about its financial viability and underscores the uncertainty surrounding even a monopoly business.

The Choctaw Indians said in May that it had paid off $18 million in debts, but $10 million came from a line of credit. That fancy accounting sounds like how some casino customers manage their finances by robbing Peter to pay Paul.

However, the credit line may be the least of the casino’s troubles. The FBI raided the casino last month; Moody’s downgraded the tribe’s bonds to junk status; the firm that audits the casino’s finances quit and a number of top officers have left. Other than the FBI raid, credit downgrade, auditors’ resignation and exodus of top officers, Mrs. Lincoln how did you like the show?

To top it off, the casino has only been open for less than a year.

END_OF_DOCUMENT_TOKEN_TO_BE_REPLACED

Ohio Gov. John Kasich has hired an outside consultant to explore privatizing the state’s $2.6 billion lottery system. The governor believes the state could make even more money by allowing a private company to run the lottery. Such a move could also mean less regulation and oversight.

The move is the latest effort in Ohio to maximize revenue from gambling. The state legalized four commercial casinos, which are expected to open next year.

Kasich has now awarded three lucrative contracts to consultants to examine various gambling options. Spectrum Gaming Group of Linwood, N.J. is advising the governor on whether Ohio should allow additional gambling beyond the lottery and the casinos. Moelis & Co., a Los Angeles investment firm, is advising the governor on taxes and fees  the state should receive from the gambling industry.

END_OF_DOCUMENT_TOKEN_TO_BE_REPLACED

A very strong editorial in The Post-Journal today makes the case against further legalization of casino gambling in New York. For starters: New York’s constitution forbids commercial gambling and requires the state to prevent its spread.

Apparently, Gov. Andrew Cuomo hasn’t read the state constitution. He recently floated the idea of legalizing casinos under the tired argument that the state needs more tax revenue and other states have done it.

The Jamestown newspaper also makes a compelling argument against the current expansion of video lottery terminals at racetracks. It also argues that the state should look for ways to better manage its finances rather than go down the path of more gambling, which the state constitution forbids.

END_OF_DOCUMENT_TOKEN_TO_BE_REPLACED

Studies show that wherever casinos locate crime goes up. Most incidents don’t make the newspapers, but the steady string of crimes serve as a regular reminder of the downsides to gambling that often get overlooked or ignored by government officials.

Here’s a recap of some the incidents from around the country in just the past week: Several Hells Angels gang members are suspects in an attack of rival gang members at a casino Northern California.

A 75-year-old Buffalo man robbed a bank in upstate New York and then went to a Indian tribe casino to gamble. The story mentions that such criminal incidents are growing in the area as the number of problem gamblers has increased since the casino opened.

A Colorado man was sentenced to at least three in prison for robbing a craps table at the Bellagio Casino in Las Vegas. He faces a separate sentencing for robbing another casino several days before the Bellagio heist. The man, known as the “Biker Bandit,” is the son of a judge but obviously is not very bright as this account in The Los Angeles Times details.

Two casino workers were among a group of five charged with robbing an armored car outside the casino and race track in Miami. One of the armored car guards was killed during the robbery.

Just another wild and deadly week inside the ever-glamorous casinos. Taxpayers will be stuck with the costs to pay for the law enforcement, court fees, and jail time used to handle these incidents and others.

END_OF_DOCUMENT_TOKEN_TO_BE_REPLACED

Massachusetts lawmakers have quietly worked out a deal to add commerical casinos across the state. The Berkshire Eagle laments in an excellent editorial how the measure was crafted in secret by top lawmakers in the House and Senate, along with the governor, and is being presented to rank-and-file lawmakers as a done deal with little debate.

Meanwhile, gambling interests have spent more than $1 million on lobbying in Massachusetts just in the first six months of this year, The Boston Globe reports.

This is the same backroom playbook that has been used in other states to ram through legalized gambling. Voters often have little say in such a major policy shift by state lawmakers. (And when they do they often vote it down, until the casino interests spend enough money to change public opinion.)