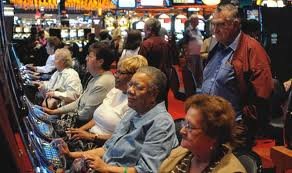 Slot machines are the biggest revenue generators for casinos. Among the slot machines, the penny machines are actually the most profitable because gamblers often play the longest, losing the most over time. One reason is the new high-tech slot machines can be very addictive, as a book by M.I.T professor Natash Dow Schüll details.

Unlike the old one-armed bandits, today’s video slot machines are built for speed. Gamblers can place a bet every three seconds (or 1,200 times an hour) pushing electronic buttons and paying with credit cards rather than coins. There is essentially no break between bets, leaving little opportunity to process what has transpired.

Some machines allow gamblers to pick the moment when the reels stop spinning, giving gamblers the illusion that they are partly in control of the outcome. But in reality the slot machines contain random-number generators that pre-determine the outcome regardless of when the gambler pushes the button.

More problematic, most slot machines allow gamblers to place multi-line bets. For example, a gambler can bet on up to 20 different pay lines in a single game. If a player wins on 9 of the 20 lines, the machine gives sound and video effects as if the player won when in fact they lost most of what was wagered. These so-called false wins are misleading. The combination of the rapid play and false wins results in slot machines that are more addictive.

Professor Schüll interviewed gamblers who spoke of getting into a “zone” in which they enter a mindless state and lose all sense of control.

Addiction specialists say the near-wins and false wins can set off the same reward mechanism in the brain that is activated by actually winning a game. Jon E. Grant, a professor of psychiatry at the University of Chicago, says many problem gamblers seeking treatment appear to be more severe than 10 or 15 years ago. The multi-line machines is one of the reasons, he said.

Lawmakers who enable casinos may or may not be aware of the changes in the gambling industry. Most either downplay or ignore the issues. But the reality is many of the gamblers in the local casinos visit an average of 3 to 5 times a week, or as much as 200 times a year. As more casinos open, lawmakers are essentially putting the addictive slot machines on the doorstep for more people, creating easier access and more addiction all in an effort to generate revenues for state coffers.