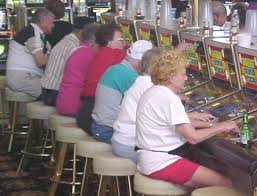 One of the inherent conflicts of gambling is that the more citizens lose, the more tax revenue the state takes in. Here’s another troubling conflict: the casinos fund the treatment for problem gamblers.

In Massachusetts, the $1.8 the state earmarked to help problem gamblers was slashed by $500,000 later in the fiscal year, according to this report. The cutbacks come as Massachusetts gears up to open commercial casinos, creating a likely surge in problem gamblers. That what has happened in other states. Other states have cut funding for treatment in recent years, according to The Wall Street Journal.

The cutbacks come as more states legalize casinos, creating more opportunity for gambling addiction. According to a report by PBS: “In Louisiana, four years after the state legalized casinos and slots, a study found that seven percent of adults had become addicted to gambling. In Minnesota, as 16 Indian casinos opened across the state, the number of Gamblers Anonymous groups shot up for one to 49.

It is a safe bet that as New York looks to legalize commercial casinos, there will not be much help for problem gamblers despite claims by lawmakers to do all they can to help the addicts they will create.

END_OF_DOCUMENT_TOKEN_TO_BE_REPLACED

Those who support casinos should keep an eye on the gambling industry evolution currently playing out in West Virginia.

First the casino industry spends hundreds of thousands of dollars on campaign contributions and lobbying fees in order to get state lawmakers to legalize gambling. (In some instances, lawmakers get busted for corruption and go to jail.) Then the casinos open and everyone is happy as the states enjoy a spike in tax revenue from the casinos and create some jobs. But the revenue doesn’t do much to lower taxes, improve education or any of the other promised reasons lawmakers used to rationalize their support for gambling in the first place. Often the projections of gambling windfalls are wrong.

Then casinos open in neighboring states and gamblers begin to get tapped out, causing the tax revenue to level off or drop. (See Pennsylvania, Indiana and Atlantic City.) Some casinos are forced to lay off workers. Then the casino industry and their high-powered lobbyists go back to lawmakers seeking lower taxes and fees. Since money talks, the lawmakers jump. The taxes and fees are lowered leaving the state with less tax revenue. But the profit margins increase for the casino owners. And isn’t all that matters?

West Virginia has been hurt by increased competition from Pennsylvania, Ohio and Maryland, which have all opened casinos in recent years. So to help the struggling casinos in West Virginia, lawmakers there slashed the taxes and fees they pay by nearly $30 million a year. Lawmakers also allowed the casinos that operate at racetracks to scale back on racing. Never mind the reason, the reason casinos were first legalized there was supposedly to support the racing industry.

This is the playbook the casino industry follows in state after state. (See similar deal in Delaware. Gambling interests are working to lower taxes in New York as lawmakers there debate legalizing commerical casinos.) As more and more states, legalize casinos, one sure bet is that this life cycle will continue to play out. One big difference: As the gambling market becomes more saturated, there will be less time between the boom and bust. The upshot is lots of loser and a state hooked on gambling.

END_OF_DOCUMENT_TOKEN_TO_BE_REPLACED

Sheldon Adelson tried to buy the White House. So it is no surprise the casino mogul’s company has admitted that it likely violated a federal law against paying bribes to foreign officials.

With federal prosecutors investigating, the Las Vegas Sands Corp. notified the Securities and Exchange Commission that its audit committee and independent accountants determined “there were likely violations of the books and records and internal controls provisions” of the Foreign Corrupt Practices Act.

The mea culpa comes after Adelson poured tens of millions of dollars into Mitt Romney’s failed bid to unseat President Obama. With no friends in the White House, the Sands appears ready to fess up to some misdeeds, hopefully pay a fine and move on.

Hopefully, prosecutors will press for a full accounting of what occurred. Indeed, the dubious business dealings appear to be widespread and not some one off deal by a rogue employee. In fact, the efforts appear to extend to upper levels of the company.

Steven C. Jacobs, the former president of the Sands operations in Macau, alleged in a wrongful-termination lawsuit that he had been pressured to exercise improper leverage against government officials. He also accused the company of turning a blind eye toward Chinese organized crime figures operating in its casinos.

The New York Times, Wall Street Journal, Reuters, the New Yorker magazine, Frontline and others have detailed some of the Sands’ sleazy business dealings in China, including tens of millions of dollars in payments made through a Chinese intermediary, attempts to set up a trade center in Beijing and sponsor basketball team.

Adelson also reportedly intervened on behalf of the Chinese government to help stall a House resolution condemning the country’s bid for the 2008 Summer Olympics on the basis of its human rights record. Adelson recently sued a Journal reporter for libel in what appears to be an intimidation tactic aimed at quieting the bad press.

Of course, casinos and corruption go together like an ace of hearts and a jack of spades. As more states in the U.S. push to legalize casinos, lawmakers should keep in mind that these are the companies they are doing business with.