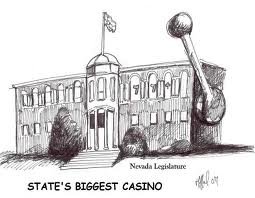 Turns out, it only costs about $2 million to get Albany lawmakers to vote to change the state Constitution. That’s how much gambling interests spent in the run-up to a vote last week to legalize commercial casinos.

As expected, lawmakers voted to change the state Constitution in order to allow as many as Las Vegas-style casino in New York. The convoluted plan calls for four casinos located upstate initially and three casinos to be added later in and around New York City. Voters must first approve the casino referendum at the ballot box in November before it becomes law.

Gov. Andrew Cuomo called the casino plan part of a larger effort to revitalize the economies of struggling upstate regions. He said the legislation was “about gaming, and gaming is about tourism, and tourism is about jobs.” Cuomo offered no numbers to support his economic claim. Instead, Cuomo staffers resorted to alleged threats to get some lawmakers to vote for the bill.

Nor did Cuomo present a cost-benefit analysis that would look at the true costs of adding casinos. Perhaps that is because casinos will do very little to boost tourism upstate. Nor will the casinos provide any ripple effect to the local economy. Yes, the casinos create some jobs and generate tax revenue for the state.

But studies show the casinos will also lead to increased personal bankruptcy, crime, divorce and suicide. The casinos do not generate new spending but instead strip wealth from the local economy. One study has found that casinos generate $3 in costs for every $1 they bring in. (No coincidence that measures to combat corruption and prohibit campaign contributions from gambling interests were rejected by Albany lawmakers.)

Lawmakers do not care about that. New York, like other states, was driven to enable the misguided gambling policy by the river of campaign money that has flowed into the coffers of lawmakers. Consider that Cuomo never even mentioned casinos when he was running for governor. But eight months later he made casinos a major initiative of his administration.

Meanwhile, gambling interests have given nearly $2 million to statewide campaign committees, candidates and parties, according to an analysis by the New York Public Interest Research Group. That may seem like a lot of money to some but it is peanuts to the casino interests. In fact, the average casino takes in $2 million in revenue every two days. Most of that money comes from the pockets of the elderly, minority and working-class residents of New York - the very citizens Cuomo and lawmakers are supposed to protect not harm.

END_OF_DOCUMENT_TOKEN_TO_BE_REPLACED

One thought on “Albany sells out to casino interests”