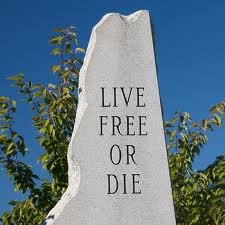 The casino industry almost always gets its way in state capitals - once the lobbyists and campaign contributions roll in. But a majority of House members in New Hampshire voted down a plan yesterday to legalize casinos in the Granite state.

The 173-144 vote against adding one casino in New Hampshire was rebuke for Gov. Maggie Hassan, the main backer of more gambling. Other proposals to allow six slots parlors were also rejected.

It would be nice to say the vote signals that the tide is turning against casinos, which have failed to deliver on many of the promises in other states. But it is more likely the vote is a testament to the truly democratic way New Hampshire’s House is structured. The members are only paid $100 a year and many are retirees. Unlike other states, New Hampshire’s House members are not slick career politicians beholden to special interests.

Most important, the House members understand that a public policy built around inducing residents to gamble away their hard-earned money is a bad way to fund the government.

END_OF_DOCUMENT_TOKEN_TO_BE_REPLACED

Brockton casino opponents reaching out to residents in final days of election Joseph Markman, The Enterprise, 5/1/2015

Expanding gambling not the answer to state budget woes Will Herman, The CT Mirror, 12/18/2014

Plenty of reasons why not to legalize sports betting David Blankenhorn, Deseret News, 11/28/2014

Lawmakers all in on gambling as revenue crutch Paul Davies, The Philadelphia Inquirer, 9/12/2014

Legalizing casinos: Jobs have nothing to do with it David Blankenhorn, Deseret News, 7/11/2014

Is The Gamble On Casinos Paying Off? Tom Ashbrook interviews Barbara Dafoe Whitehead, On Point with Tom Ashbrook, 6/24/2014

Are Too Many Seniors Gambling Their Lives Away? Adam J. Wiederman, Daily Finance, 3/18/2014

How casinos prey on the elderly Robert Goodman, The Sarasota Herald-Tribune, 2/24/2014

History tells us the slot machine is a loser David Blankenhorn, Tallahassee Democrat, 1/31/2014

Back Of The Ballot: Vegas-Style Casinos In Upstate N.Y. To Be Decided Tuesday Tony Aiello, CBS News, 11/4/2013

NY casino pitch is a bad deal: Vote 'No' on Proposition One Editorial Board, Syracuse Post-Standard, 11/3/2013

Be Our Guest: A vote to legalize commercial casinos is a losing bet Paul Davies, New York Daily News, 10/27/2013

Cuomo's push to legalize casinos in N.Y. has been dishonest Paul Davies, The Westchester Journal News , 10/25/2013

'It's all nonsense': A forum on casino expansion gets emotional Dana Rubinstein, Capital New York, 10/23/2013

Debate on casino referendum planned at SU The Associated Press, The Observer-Dispatch, 10/16/2013

The dark side of casino gambling David Lombardo, The Daily Gazette, 10/15/2013

Yet Another Study Says Casinos May Bring Economic Harm, But Not For The Pols Profiting Off Of It Willie Simpson, Sheepshead Bites, 10/9/2013

Another Voice: Casinos will do more harm than good to New Yorkers David Blankenhorn, The Buffalo News, 10/2/2013

9 Things You Should Know about Casinos and Gambling Joe Carter, The Gospel Coalition, 10/1/2013

Casino Amendment No Sure Bet Editorial Board , Rochester Democrat and Chronicle , 9/26/2013

Casinos a Bad Gamble for the State William A. Johnson and David Blankenhorn, Albany Times Union, 9/24/2013

State vote on casinos is a test of confidence as 'inevitability' looms large Tom Precious, The Buffalo News, 9/15/2013